You are here: Home > Target over 50s through Social Networking
By Louise McCartan on August 15, 2010 in Eon, social networking, Twitter
Share this article... 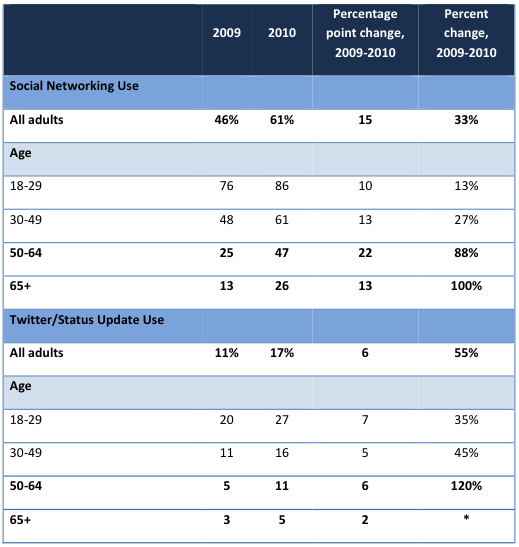 According to the Pew Internet & American Life Project, social media usage among people 65 years and older doubled between 2009 and 2010. In the 50 to 64 age group, it increased 88 percent. And now, almost half (47%) of adults between 50 and 64 years old use social networking sites, and more than a quarter (26%) of pensioners do the same. Among all adults, social media usage jumped 33% over the past year, with nearly two-thirds of all U.S. adults involved in social networking online. These stats are from American research, but the UK is usually very close behind.

Pew claim the increase in over 50s using social networks is due to the following:

Twitter usage is particularly popular amongst older users, due to both its simplicity and its coverage in the mainstream media. Eon is a particularly popular social network in the USA for an older demographic, but hasn’t achieved the same market penetration here yet. Many older users are joining Facebook, as it allows them to keep tabs on their children or to stay current. Some news reports have suggested that this phenomenon has actually put younger people off social networking and that that demographic is decreasing.

I think this can all be seen as good news.  There have been several studies into the health benefits of social networking amongst the elderly.  As the world becomes more and more technology based, familiarity with computers has become increasingly important. As people become more immersed in social networking, they will become aware of the possibilities of the internet beyond simple text pages.

From a commercial point of view, this is great news for online businesses. Older customers are a lucrative new market, under-targeted by advertising campaigns.

Key things to remember when targeting advertising at older customers:

What do you think?

Do your customers belong to an older demographic? Do you use social networking to reach your target audience?

Please Reply & Share this Article using the Icons below.

One Response to Target over 50s through Social Networking