You are here: Home > Shortlisted for Three 2018 DANI Awards
By Louise McCartan on March 26, 2018 in AdWords, northern ireland, Search Scientist
Share this article...

The DANI awards have been celebrating the best and brightest digital marketing talent in Northern Ireland since 2010. In 2014 our MD Louise McCartan was honoured to be recognised in the top 3 Digital Industry Persons of the Year.

We’ve come on leaps and bounds since then, being shortlisted among the best AdWords agencies across all of EMEA at growing businesses online at last year’s Google Premier Partner Awards. Following that success, we decided to submit one particular campaign to this year’s DANI Awards that we thought warranted recognition. This was a specific campaign with our ongoing client, Queen’s University Belfast.

We’re delighted to report that the DANI Awards 2018 shortlist has now been released and our campaign has made it through to the final 4 in the category of ‘Best Campaign in Education’ as well as ‘Best Digital Advertising Campaign’!

This is in addition to our MD Louise McCartan once again being nominated and shortlisted for the position of Digital Industry Person of the Year! Thanks so much to all those that nominated Louise. Making it through to the final three candidates she was then interviewed by the judging panel, assessing her success and contribution to the NI Digital industry in the last year. 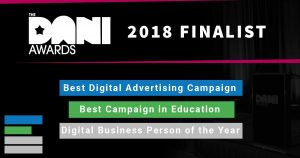 Thus, team Search Scientist is very much looking forward to our night out at the DANI Awards next month. Wish us luck!