You are here: Home > Green Star Ratings on Google
By Louise McCartan on February 23, 2015 in Google Ratings
Share this article...

Green Stars to Replace the Gold?

Browsing the internet yesterday (22nd February 2015), I noticed that Google’s star ratings were showing in green (as below) rather than the typical golden orange. I tried various searches on a few other devices, signed in with different Google accounts, but it was only on one that they were showing in green. I heard about Google testing grey, blue and green star ratings in the USA last year. A year later, I’m wondering if they’re closer to going for green, or perhaps they’re now just rolling these tests out to the UK. 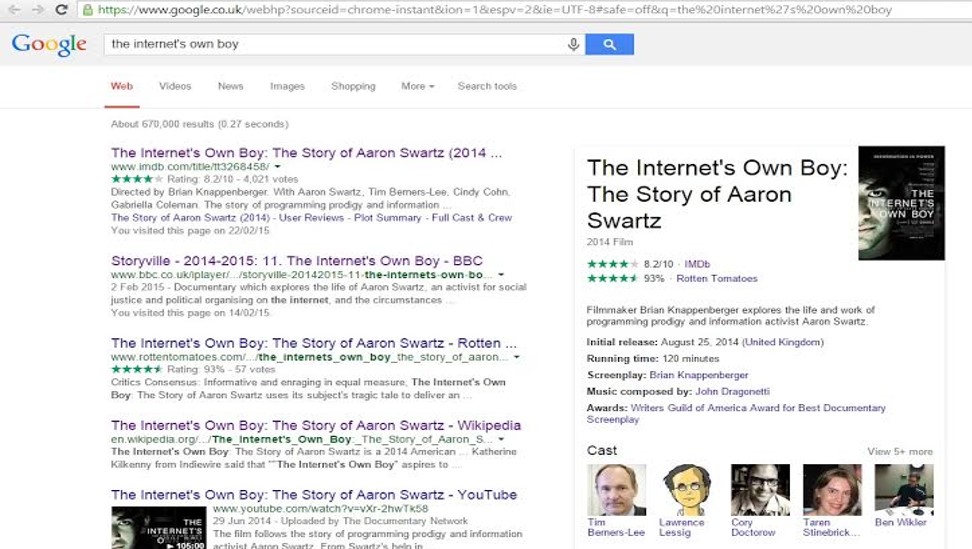 Note too that it’s not just movie/critic reviews that are being allocated green stars when logged in to this Google account. Consumer, product ratings are showing in the same way. I must add that ‘The Internet’s Own Boy: The Story of Aaron Swartz’ is really well worth the watch. Great, award winning documentary on a topic that’s likely to be of interest to our readers. It’s available free to watch here – http://www.bbc.co.uk/iplayer/episode/b051wkry/storyville-20142015-11-the-internets-own-boy, though only for another 9 days.

What do you think?

There’s no doubt that star ratings and reviews are growing in importance, and I’m sure they will evolve through time. They help click through rate, and give a competitive edge over rival companies who don’t have them. But, what do you think of the green stars? To me it seems the green stars stand out less than the gold ones we’re accustomed to, as they blend in with the green URL links in the SERPs. The contrast of the golden orange to the other colours on the page helps the stars to stand out. We’re also used to seeing gold stars in the physical world, e.g. on hotel signs, so we have an automatic positive association with five gold stars as being a sign of quality and recommendation. The green stars, in my opinion, lose this somewhat.

This sums up my gut feeling on this. I’d really rather keep the stars in gold than move to green. I’m keen to hear what you think. Please comment below.