Firstly everyone here at Search Scientist would like to say a huge thank you to everyone who took part in our Facebook experiment last week and for those who missed it, let’s recap.

Many of you may be familiar with Facebook’s Edgerank algorithm update a few years ago. It meant that not everyone who likes your business page will ever actually see your posts. Those people who interact more with your posts by liking, sharing and commenting will be more likely to be shown your future posts in their news feed.

Recently the reach of Facebook posts has declined further and further, now with an average reach to only 6.5% of the Facebook page followers. Off the back of this, Search Scientist decided to run a little experiment, with your help. We were keen to see if having one really popular post, with lots of likes, shares and comments had a knock on effect on the reach of future posts.

On May 14th we encouraged our Search Scientist Facebook page followers to ‘Like’ our status update, and we were delighted when a lot of you duly obliged. That particular post achieved an impressive:

For the following week we continued to post as normal, using a variation of Photos, Links and Status Updates.

Interestingly, it doesn’t seem that one popular post has a direct effect on the reach of future posts. We’re of course aware that there are a lot of contributing factors, such as the 9 new page likes as a result of the experiment post and that some posts before/after the experiment may have been slightly more engaging that others. However we did try to keep it as consistent as possible.

The graph below shows the organic reach of our Facebook posts, before (blue) and after (red) the experiment post. For there to be a significant increase in post reach after that one popular post, we’d have expected the red bars to be considerably higher than the blues.

This can be further demonstrated below when we look at the overall reach of posts, day by day, before and after the peak of the reach of our experiment post on 14th May. The reach of our posts pretty much returned to normal after that post. 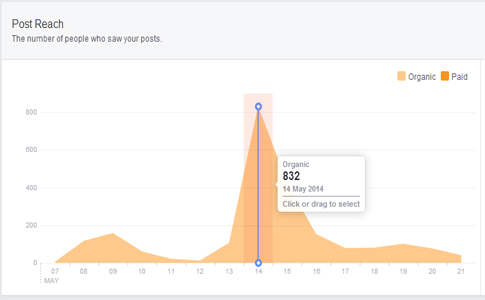 So, how can business owners with Facebook pages, increase the reach of their posts?

Familiarising yourself with Facebook Insights can provide a lot of information about your target audience and how they like to behave. For example, you can easily view the time of day that your fans are online: 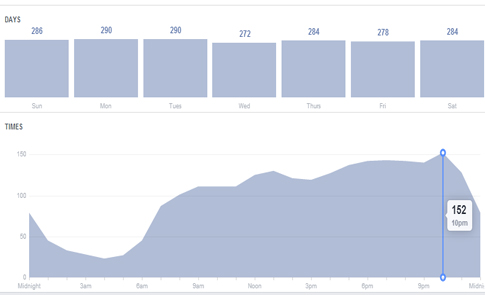 Here we can see that we have the highest proportion of our fans online at 10pm. This could be a good time for us to post at to reach those people. This time will vary depending on your audience, so have a look at your own Facebook Insights page to see what’s going on with your page.

Generally speaking, and as demonstrated in the first graph above, text only posts have the largest reach, followed by image posts, then followed by posts with links. This is worth bearing in mind when you post online.

Even with that though, as of the last few months, your Facebook posts may only reach less than 10% of your followers on average. This has led many people to consider using Facebook ads. It certainly seems that Facebook is pushing business owners in this direction.

We’ve had mixed feedback on Facebook ads. What do you think?